A tour through the history of pink

I have been looking at the research undertaken by Michel Pastoureau, historian of colour: his work illustrates the history of colour in the Middle Ages or, rather, how colour has been experienced by our societies. “For art historians, there is this notion that line takes precedence over colour, following on from Plato and Aristotle for whom colour seemed superfluous. At the end of the Middle Ages, this idea intensified until the seventeenth century, was revived in the eighteenth century and returned in the nineteenth, notably with Delacroix.” Let’s ask this question from the point of view of fashion, for example: Why is pink for girls?[1] According to Emmanuelle Berthiaud, a historian specialising in women’s history, “a few hundred years ago, pink was attributed more to men; it was considered a variant of red, marking masculinity par excellence. Since ancient times, it has symbolised power and authority. The word ‘pink’ did not exist in Greek or Latin. Instead, it was called ‘crimson’. Pink was worn during the Renaissance; it was a fashion for the elite and for men. In France, at the time of the Enlightenment, Madame de Pompadour made pink fashionable, but there was nothing specifically female about it.  From the twelfth century onwards, blue was a colour increasingly attributed to women, in reference to the blue cloak of the Virgin Mary. Children were most often dressed in white, which evokes purity and innocence. The Protestant Reformation influenced fashion and brought about changes by favouring black, brown, grey and blue. Blue was increasingly associated with power. Women, including peasant women, often dressed in red. Goethe explains that ‘the female sex in its youth is attached to pink and sea-green’. In the nineteenth century, coloured clothing became more ‘democratic’; red and blue were also used for children, in softer tones. In English-speaking countries, the use of blue for boys and pink for girls began in the mid-nineteenth century for the elite, then intensified with the development of marketing. At the end of the Second World War, pink became an established part of advertising for housewives. From 1980 onwards, our consumer society encouraged the differentiation between boys and girls, so that the older sister or brother would not pass on her things or toys to her younger brother or sister.” For the historian Michel Pastoureau, colour is first and foremost an abstract notion. Contrary to the neuro-aesthetic approach, according to him, it is society that makes colour: it is cultural. Colour is resistant to analysis and synthesis. In his opinion, yellow is a sunny colour associated with joy.  In the Middle Ages, yellow was considered a benevolent colour; but from the end of that period, everything became brown, and yellow was associated with illness, with the colour of urine. Later, Vermeer used yellow, and the Impressionists brought this colour back into the limelight for good; the Fauvist painters highlighted yellow again, through the work of artists such as Henri Matisse, André Derain, Maurice Vlaminck, Vincent Van Gogh. Indeed, it was the painters who rehabilitated yellow. Pastoureau also says that the more humble social classes in the eighteenth century wore bold colours, while the elites distinguished themselves with half-tone colours. According to him, too much colour kills colour. He mentions that urban planners have sought to place large areas of bright colours in the urban fabric, and that the population asked them to remove this social marker.

From art history to neuroscience

While the history of colour is a fascinating subject, the fact remains that the historian’s approach is based on social and cultural issues, not biological ones, unlike neuroaesthetics. Neuroaesthetics focuses on the human system as biological identity: this implies that the power of neuroaesthetics must be relativised, since cultural parameters are a part of aesthetic judgement. It also implies that the historian’s point of view and that of cognitive psychology complement each other and provide different kinds of information. In cognitive psychology, the Western visitor to a museum such as the Louvre is faced with works that represent his idea of beauty: in other words, what is recognised as such by his own culture. The works he sees become his reference of beauty. According to the anthropologist Marcel Mauss, a work of art is what is recognised as such by a group of people. The historian, on the other hand, has skills that belong to the past; the profession of art historian was created in order to categorise works according to ethnic groups and periods, whereas the neuroscientist focuses his research on living beings. The measurement tools at his disposal have only been in existence for a few decades. For example, this implies that psychologically interpreting the red cloak in Little Red Riding Hood would not seem a worthwhile exercise, because the story is from another era with other codes.

Nobel Prizewinner for medicine Eric Kandel recommends the diffuse to force cognitive activity. Contrary to what Plato thought, for neuroscience, colour takes precedence over line; more precisely, it is light that takes precedence, colour being corollary to the wavelengths that are deposited on photons.The founders of neuro-aesthetics, Semir Zeki and Vilayanur S. Ramachandran, base their experiments on patients from different cultures and social backgrounds: their ambition is to overcome divisions and provide universal knowledge. When I present my work in the West, I consciously and unconsciously incorporate subtleties from my culture. What about when I present my creations to a distant culture?  I work in Asia, and I know Japan fairly well, for example; but not well enough to read all the subtleties, since I was not born in the Land of the Rising Sun. In this case, my aesthetic proposal brings our cultures closer together, and the biological effects should be similar; therefore, this does not exclude the phenomena created in the observer. Thus, the strangeness and break with preconceived ideas are more favourable, but so are misreadings. For example, while white is associated with peace in the West, it is during the Japanese funeral ceremony that relatives are traditionally dressed in white, as this is the colour of mourning.

Another phenomenon seems interesting to note: when a Westerner observes, for example, a painting by Botticelli, this artist is part of his cultural heritage. However, the work observed comes from another era: an era that the viewer did not live through, and this implies that what the viewer projects is something that is not the same as what the contemporaries of the painting projected. In this case, Botticelli’s work is transformed; it is reincarnated through the viewer’s own elaboration, living in another context. Botticelli’s painting is no longer the same, but is malleable and is transformed as a function of our history. The very nature of art is to become what we make of it; it depends on the way we are pervaded by the work. If we know the aesthetic effects produced in our contemporaries, the past belongs to historians, who strive to understand ancient civilisations. This does not exclude the appreciation of a work of art from the past, although it does not project the same as when it was created. The work of art is the result of a reconstruction.

The historian gives us an ethnological view of the world of dead people, while neuroaesthetics observes the living. 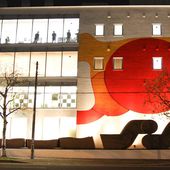 Guillaume Bottazzi "My own butterfly" EN : Itsutsuji gallery is a major gallery in Japan. It has discovered and represents artists such as Simon Hantaï, Pierre Soulages, Yayoi Kusama, Ay-o,  but also introduced movement such as Support-Surfaces, with artists such as Claude Viallat, Daniel Dezeuze and Jean-Pierre Pincemin, as well as Pierre Buraglio, Gérard Titus-Carmel and Guillaume Bottazzi. M. Itsutsuji was knighted by the French Government “Chevalier des Arts et des Lettres.” Guillaume Bottazzi is represented in Japan by  Itsutsuji Gallery since 2004. 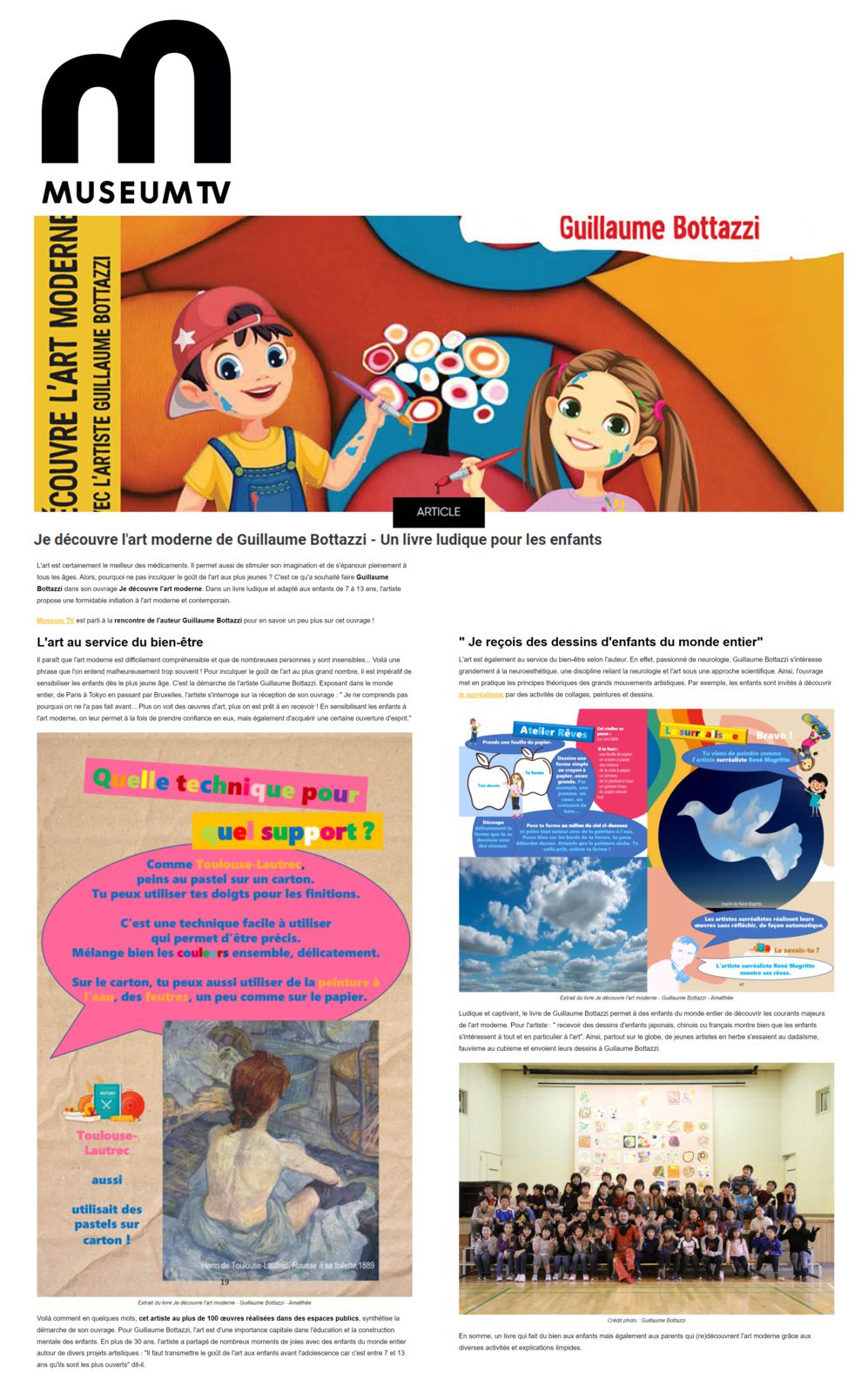