Guillaume Bottazzi - Dance floor with a sound and light

flying in the dark Guillaume Bottazzi : Priorities in art, neuro-aesthetics and its orientations Since many people in the art world seem to lose themselves in a compartmentalised world and in preconceived ideas, and since scientists do not always understand what is at stake in art, it is important for me to give my point of view as an artist.

Look around you: we are heirs to various issues that make our world seem chaotic. Paradoxically, we are also becoming aware that we are in an ecosystem, and that this ecosystem is itself part of another ecosystem. Consequently, there is no ‘I’. This is not chaos: everything is connected and the work of art is a bridge between the microcosm and the macrocosm.

The history of art seems to reveal a shared interest by artists to draw closer to the public. In the Renaissance, we discovered Donatello’s sculpture in the Piazzale degli Uffizi in Florence freeing itself from its pedestal. Later, Baroque artists introduced movement into the work of art, in order to solicit the viewer’s fascination. Thus, as the German author Karl Philipp Moritz wrote, the work of art presupposes the experience of the viewer.

Neuroscience allows us to bring the work of art even closer to its audience; and this search for proximity is important because what makes a work come alive is the observer’s elaboration of it. Nevertheless, the priority lies elsewhere.
Donatello or Rubens, for example, drew closer to the audience, as we explained earlier; however, they also sought to elevate the viewer, unlike the recent work of Jeff Koons (to name but one) who seeks to draw the audience in, but not to elevate it.

With good sense, Vassily Kandinsky considered that the work of art elevates us spiritually; this elevation is measured by the tools we have today. However, over the last 20 years, our cognitive capacities have been regressing and we must therefore place our cursor on the optimization of human potential.

The work that prevents the viewer from thinking for himself atrophies the fields of possibility in art, insofar as it is the observer’s elaboration that allows him to facilitate the modulation of his neurons. 1 Thus, narrative art forces the viewer into a passive role and limits his own elaboration, and figurative art limits our cognitive activity; etc.

Therefore, the work of art has the vocation to stimulate our imagination and to encourage our initiatives.
It must encourage the onlooker to elaborate.

This implies that the work is opposed to capture or control, as Marc-Alain Ouaknin describes in Éloge de la caresse (2016); on the contrary, it encourages us to travel, to build, to recreate, to evolve, to strengthen ourselves, constantly linked to the inside and the outside.

While we are embarking on this new era – called the ‘Anthropocene’ – with so many problems, we nevertheless have information that could allow us to readjust our orientations. art in situ - In process 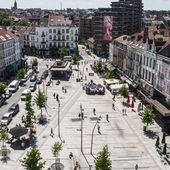